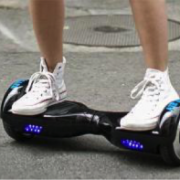 We all think the hoverboards ban is ridiculous, even Boris Johnson gets it, he might not know what to call it but at least he understand how absurd it is.

After speaking with experts at London’s transport department, the Major of London said he wants to put an end to “this ludicrous and nannying prohibition on the electric scooter-surfboard gizmos.”

The electric scooters are banned under the 1835 Highways Act, which came about when electricity was still in its infancy. To put it into perspective, Michael Faraday invented the electric motor in 1821. The act states you cannot use pavements to “lead or drive any horse, ass, sheep, mule, swine, or cattle or carriage of any description” – and that includes self-balancing scooters.

A 1988 law bans them on roads, as motorised vehicles must be registered and the rider licensed and insured.

The Major of London said “Well, I have consulted Transport for London (Surface Transport) experts, and they think this hogwash. They are a new and potentially liberating form of personal mobility.”

“We want to legalise them…” he said, and described such a move as “intergenerational fairness.”

We expect this to be overturned swiftly and for the UK to catch up with France, Germany, Ireland, Italy and the US which all allow swegway boards on pavements and cycle lanes.