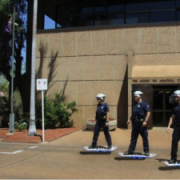 Queensland police released a statement about the deployment of their latest ‘ Hoverboard unit ’. The futuristic force was responding to reports of a car crash near a cinema.

In a tribute to Back to the Future, the spoof statement read that a “silver sedan had crashed into a power pole near the cinema.”

When questioned what speed he was doing, the driver stated “he was doing 88 miles per hour.”

Police said “a 17-year-old man was charged and was in possession of a licence which expired over 30 years ago.”

“Investigations into the vehicle and what a flux capacitor is, are ongoing.”

The tribute by Queensland police has proved popular with Back to the Future fans worldwide.