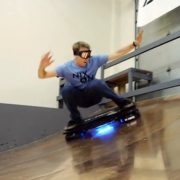 This week a driverless car overtook a human driver and forty thousand people filled a stadium in Seoul to watch the League of Legends World Championships.

But the big epic news this week is that the dream of every 80’s child has finally come true. Because one company is currently trying to kick start their prototype Hoveboard into production.

It works through four disk shaped engines at the bottom and these create a magnetic field which pushes against the ground and allows the board to hover or levitate. It’s worth noting though that this only works on specific surfaces at the moment so unless they rip up the entire road network in your city, it might be worth sticking to your Swegway.

But be warned this ‘Real’ Hoverboard is not easy to get the hang off, even the legend Tony Hawk finds it difficult to stay on this board. In one scene he looks like is has mastered it like a skate board spinning vigorously as he goes up and down the ramp, until the rotational inertia catches up with him. But hats off to the legend that is Tony Hawk, if anyone could have done it, it would be him.

Check out Tony Hawk in action:

As we are keeping with the theme of ‘real’ Hoverboards, car manufacturer Lexus unveiled their version of the Hoverboard.

While it actually hovers, it will only do so in a specially constructed skate park. The released footage shows skateboarders testing the board with varying degrees of success.

The Hoverboard contains powerful magnets which are cooled to -197 degrees celsius with liquid Nitrogen, this then allows it to hover along a track hidden in the surface of the specially constructed skate park in Barcelona.

Lexus have stated that the Hoverboard is only a prototype and will not be available for sale. Click out the board in action below.