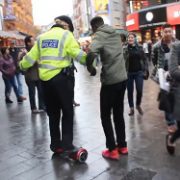 In light of the recent statement by the Crown Prosecution Service banning the use of Swegway boards on roads and public property, two Londoners put the so called ban to the test.

In the YouTube video the two friends rode their boards in front of police vans and on-duty officers, even one outside the Houses of Parliament to see if they take the legislation seriously. Not one tried to stop them.

In a funny scene one of the men rides past a police officer, when a passer-by asks “Aint that illegal?”

He then asks the officer “Are you going to arrest me?” The officer appears not to be interested.

In another scene one of the men takes a selfie with a policewomen while on his board, the office looks happy to join in the fun and even has a go on the board herself.

The video ends with a caption saying “So are swegway hoverboards really illegal? If so, why didn’t any police stop me? Make sure you show this video to all your friends that were scared to ride their segway!”