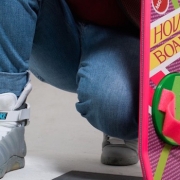 One of the most lasting impressions of Back to the Future’s utopian view of 2015 has to be the Hoverboard. In this post, we take you through the History of the Hoverboard – also known as the Swegway – from concept to creation.

After it popped up on our television screens, the Hoverboard became an instant classic when Back to the Future II hit the cinema screens in 1989. The film shows the Hoverboard began as a scooter until Marty rips off the handlebars to make it more like the Skateboard he uses in his own time period. Much like the  changes made between the Segway and the Swegway. The Hoverboard makes an impact in the film, getting Marty out of many scrapes. Since the film, the idea of a Hoverboard has fascinated generations to follow.

So many different scientists and scientific organisations have been trying to recreate one for themselves. Unfortunately however, they missed the deadline to create one working like it did in the film, but we do know they are still going to continue their work until a great one is on the market.

History of the Hoverboard

In 2001 rumours went around telling people that a Hoverboard was in production and soon to come out to market. This project was codenamed “Ginger” and was created by Dean Kamen. The project turned out to be the Segway which was a gyroscopic, two-wheeled form of transportation. Obviously, it wasn’t anything like a Hoverboard because a Hoverboard doesn’t have wheels. So why people thought he was making a Hoverboard, we’ll never know.

Between 2004 and 2005, two tv shows tried their hand at building their own Hoverboards. These programmes were Mythbusters and the Gadget Show. Both shows went about the project in pretty much the same way; neither bothered using different chemical reactions or magnets, but used leaf blowers and boards. At this time not even Jamie Hyneman or Jason Bradbury could create a Hoverboard as they both ended as failures.

After looking at all the different attempts at creating a Hoverboard, Swegways have to be the best so far. They use the same kind of science as Segways but make it look a lot cooler.

We’re not entirely sure what the future will have in store for the Hoverboard, but we know for sure that it’s an exciting one! Whatever the case however, we’re certainly sure that the Hoverboard hype is here to stay.

Want more information about the History of the Hoverboard? if so, please contact us.

View our full range of Hoverboards at our online shop HERE.

Want to read similar articles like the ‘History of the Hoverboard’? if so, take a look at our Hoverboard News posts below:

HOVERBOARD PRO What’s the difference between a Segway and a Hoverboard?
Scroll to top
%d bloggers like this: