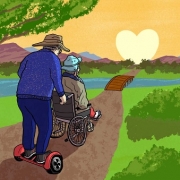 This Valentines Day we bring you a story on real love and proper Hoverboard Couple Goals! A 78-Year-Old man using his Hoverboard to push his wife’s wheelchair.

“In sickness and in health” is something often said at every wedding ceremony. However, here’s a couple that actually walks the walk – or should we say Hoverboards the board and stays true to those words.

John and Judy Anderson have been together for nearly 60 years. They met in 1958, so obviously very long before the Hoverboard was ever invented. It was even before the Back to the Future film was ever released (although McFly does travel back to 1955). Nevertheless, we’re sure that little did they think that the Hoverboard would ever become an important daily fixture in their relationship.

Anyone who’s ever helped their grandmother set up her email or work a smart phone or tablet knows pretty much that new technology can be intimidating for the elderly. However, here’s the story of a 78-year-old man who saw one and thought, “Yeah, I’ll ride one. And I’ll take my wife along with me.”

In this article, the writer Lee Breslouer describes how he first spotted John Anderson and his 76-year-old wife, Judy. Lee was driving outside of Denver, CO, near a retirement village where seniors take brisk afternoon walks when it’s nice outside. To say the least, they’ve kicked their walks up a notch: John pushes Judy’s wheelchair while he rides on a Hoverboard at good speed!

Lee asks John if he would share their story with him and 78-year-old John happily obliged. John describes how he met Judy in NY. While John was at University, Judy was studying to be a teacher at a University in Potsdam nearby. John then joined the Army and they travelled around the world visiting places such as other states, Turkey, Germany until they finally settled in Colorado in December 1989. They now have two kids and in a relationship for nearly 60 years!

In 2003, Judy was diagnosed with Parkinson’s. She is currently in skilled nursing care near the retirement village and John comes to visit Judy regularly. That’s when they go for their very special walks. When Lee asked them how their relationship has changed over time, John said, “You get used to one another.” Judy offered, “You have to have love and…” “Patience?” Lee asked. “Yes.”

For a woman who lets herself be slowly rocketed around by a Hoverboard, we can agree that she is the model of patience! While John is certainly not as healthy as back in the day, watching him Hover Judy around is simultaneously one of the sweetest and most bizarre things we’ve ever seen. 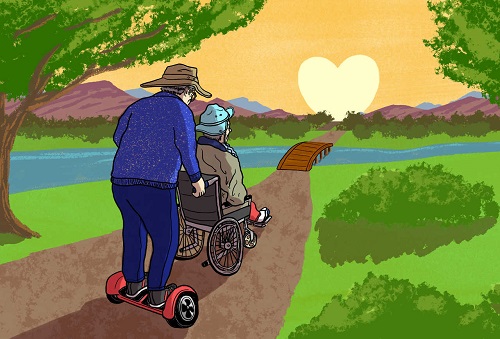 When John first saw a Segway, he knew he wanted to try one, but never got the chance. This was until he saw a local report about a local guy selling Hoverboards in his area. John purchased a Hoverboard just for the hell of it. When Lee asked him if he fell 40 times after buying it, John laughed:

John would explain that he’d practice on his Hoverboard with a ski pole or a walking stick and then eventually got to the point that he didn’t need either. Perhaps his experience as a skier and a hockey goalie likely helped him but it’s certainly a new and effective way to learn!

He realised the Hoverboard could make a great motor for Judy’s wheelchair. Lee then asked Judy how she first felt about the idea of being pushed by a Hoverboard. Was she scared?

“Not really. I didn’t know what I was in for!” she replied. I guess when you’re with someone for that long, you begin to trust them (Love is all about trust!). John tells Lee that he doesn’t take the Hoverboard to an unsafe speed. He goes about 4-5mph, which is faster than you can walk, as evidenced by the fact that Lee had to jog a bit to keep up with them in the video above.

Elderly Couple on a Hoverboard

The Hoverboard is a newer feature in their decades-long relationship, but considering they’ve travelled the world together, raised two kids, and managed to stay together through it all, it’s just the icing on the cake of their lifelong story.

What really strikes us about these two is how a 78-year-old man finds a way to embrace modern technology. Not only that but to use it to improve the time he has with his wife. Equally impressive is just how she’s totally cool with it. This is a relationship and a love that has adapted over time. Conquered disease, ageing and to new technology.

But also… it’s an elderly man whipping it around on a Hoverboard! Seriously, look at him go!

We absolutely love this story. There’s not many Hoverboard Couple Goals like this kicking about. So if you know of anything similar to this, why not share it with us? We’d love to showcase all the Hoverboard couple goals we can get our hands on.

Want to read similar news like the ‘Hoverboard Couple Goals’ article? if so, take a look at these Hoverboard News posts below:

HOVERBOARD PRO HOVERBOARD PRO: The New Face of The Original Hoverboard UK
Scroll to top
%d bloggers like this: