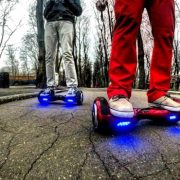 Girl jumps into swimming pool to save her Hoveboard

Hoverboards are all the rage right now and the must have gadget, if you got one then chances are you love playing on your Swegway. But how much do you love your Hoverboard?

In this hilarious video, a girl is seen riding her Hoverboard near a swimming pool and ends up jumping in the pool to save it. As she glides besides the pool she loses balance and comes off the Hoverboard while still staying on her feet, but the Hoverboard heads towards the pool and falls in.

Determined to save her gadget she jumps in head first after it and rescues the Hoverboard. The video was captured on CCTV camera and posted on YouTube by the girl’s brother, it has since gone viral. Check out the video below.

Iron Mike Tyson is in the news again but this time he is the one getting knocked out.

In the the video he posted on his Instagram, he is seen riding his childs Hoverboard in his house.

But Iron Mike looks seems confident after his spins and looks stable on the Hoverboard, he them rides towards the camera and loses his balance and takes a heavy fail on his back.

Not sure if Mike Tyson will schedule a rematch with the Hoverboard. Check out the video for yourself.

This video will have all you Back To The Future fans exited at the prospect of a real hoverboard.

In this one a guy turns his drone into a Hoverboard and rides it on water.

He impressively hovers at least 10ft from the water surface, manages to turn and manoeuvre all while staying balanced and even manages a successful landing.
Impressive to say the least.