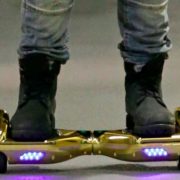 A press conference was recently held at New York’s City Hall where the new measure was announced to attendees and the press.

Senator Jose Peralta along with Assembly Man David Weprin and Councilman Andy King told the gathering that the current law which classifies Hoverboards as motor vehicles is inaccurate.

The proposed new bill classifies the hottest gadget of 2019 as essentially a fast skateboard, “This is a bill that tries to keep up with technology” said Peralta.

He then followed with “Because Hoverboards and electric unicycles are not cars or motorcycles, my proposal removes these devices from what is considered a ‘motor vehicle’ under state law.”

The popularity of Hoverboards took off last year when numerous celebrities were seen riding on these gadget in everything from music videos, airports, showing up to chat shows on them, concert performances and even doing their shopping on them. The internet craze soon followed and it wasn’t long before social media was full of pictures and videos of people hovering and having fun on these Swegways.

Authorities were stumped by the speed and popularity of this gadget and resorted to illogical bans which classified the devices as motor vehicles as in the case of New York, or as in the case of the United Kingdom which banned their use under the 1835 Highways Act. An unwanted phenomenon known as the Hoverboard ban.

The clearly outdated act states you cannot use pavements to “lead or drive any horse, ass, sheep, mule, swine, or cattle or carriage of any description”, lumping Hoverboards with the aforementioned.

Since then a number of politicians have moved to remove the ridiculous ban and attempt to regulate their safe usage on pavements and walkways among them London Mayor Boris Johnson.

However you can still legally ride your Swegway in France, Germany, Ireland, Italy and some US states which all allow Hoverboards on pavements and cycle lanes.