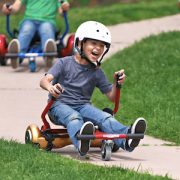 In the third instalment of our challenge video series, we will showcase some of our favourite Hoverkart Swegway challenge videos. It’s already fun to do challenges on the UK Swegway alone, but add a Hoverkart and things are bound to get interesting. 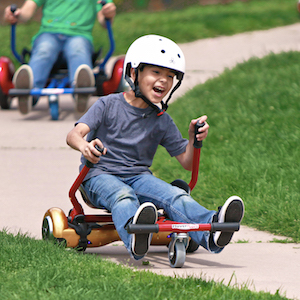 Today we are pleased to show you some of our favourite new Hoverkart Swegway challenge videos. Ever since UK Hoverboards first came about, people have been trying to think of more fun and interesting tricks to do with them.

We’ve featured a few Hoverboard videos in the past, but today we turn our attention to an even newer challenge: doing tricks using a Hoverkart. In case you didn’t know, a Hoverkart is an accessory of the Hoverboard. Its purpose is to turn a standing Swegway or Hoverboard into something you can sit on and manoeuvre using handles instead of your feet – just like a Go Kart!

Hoverkarts open up so many new possibilities for regular riding in general but can bring lots of new tricks and challenges to the plate as well. Here are some of our favourite videos showcasing the Hoverkart Swegway and Hoverboards. 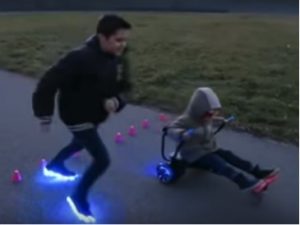 The first video that we’re featuring comes to us from France. The user “Swan the Voice – Neo and Swan” shows us all their cool Hoverkart tricks in the following video:

Their first challenge is them seeing if a person can outrun a Hoverkart over a long distance.

As you can see, the answer is an obvious “no”, but they gave it a great try! These kids just couldn’t match the Hoverboard’s top speed. Next, they ran a short distance to see if they could beat the Hoverkart.

In this case, one of the runners won because the Hoverkart hadn’t reached it’s top speed yet, but it was close! The third challenge they do is an obstacle course where they weave between cones.

Both kids do really well, showing the great manoeuvrability of the Original Hoverkart, as well as how experienced they are with using it. Even though the video is in French, you can still get what challenges the kids are trying and you can see just how much fun they’re having with them! 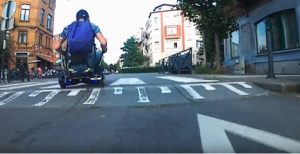 Our second featured video is by a user called “Vincent”. Though this video isn’t as popular as our first featured video, we really like it because it shows the journey of a Hoverkart rider from a first-person perspective. Since that pint, we hadn’t seen this angle of a Hoverkart being ridden, so we love this new view!

In the video, you can see the person filming and their friend riding down the street on their Hoverkart’s. The video shows off a lot of the great features of the Original Hoverkart. First of all, they are better suited to go longer distances for those who might not be able to stand or balance for that long.

Next, you can see them handling the road and speed bumps with ease. The Hoverkart doesn’t seem at all phased by the obstacles and keeps right on going just as quickly as before. This video also shows off the way that the Hoverkart turns every so sleekly and smoothly. Using the handles rather than your feet and balance, the riders turn with ease using the handle-bars.

All corners are traversed with ease, something that might be a little harder to get the hang of if you’re just starting to learn how to use a Swegway or Hoverboard. Aside from how cool the Hoverkart looks, riding around in the city like that, the video looks great and gives a neat little tour of their town.

As always, if you film an interesting UK Swegway challenge, Hoverboard trick, or Hoverkart stunt that you would like for us to feature on our site and social media, please e-mail it to us at info@hoverboard-pro.co.uk to be featured on our YouTube channel and in an article on our website. We look forward to seeing all of your cool videos!