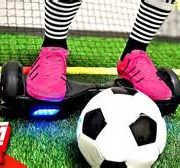 Hoverboards or Swegways are futuristic two-wheeled smart boards, which have become one of the main breakthroughs of the 21st century. As soon as this wonderful technology came on markets, it quickly became the most popular must-have gadget around the world, including the United States and the UK. 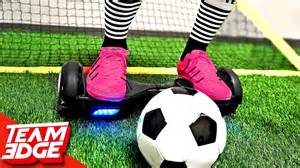 As with anything remotely funny nowadays going viral on YouTube, hoverboards and Swegways have quickly taken their position as leading roles in thousands of funny homemade and official videos. The result was a lot of falling compilations; thousands of funny moments as well as creative challenges making people compete while having extremely good fun.

One example is a group of guys called ‘Team Edge’ who came together with an idea to create videos that would inspire people and help them to create fun while riding their own Hoverboards. Team Edge has recorded plenty of extremely funny videos, which included various challenges. Below are two of the most interesting of challenges we found so far:

In this funny video posted by ‘Team Edge’, the squad had to be split into two teams and play football on their hoverboards. With strict rules, they compete against each other, while a referee watches over to make sure everything goes smooth.

Of course, the video is full of funny moments with both teams hopelessly doing their best to win, proving that doing so on Hoverboards isn’t an easy task at all. Everything went on another side when at the middle of the video one of the players broke his Swegway, so the rest of the team had to improvise and create new funny parts of this fantastic Hoverboard challenge. At the end of the video, the winner had to be decided by way of a penalty shootout. Watch the video here:

Once again the ‘Team Edge’ boys have innovated an interesting Swegways Challenge and Hoverboard game! This time, the centre of attention was a giant Jenga block. We all know the aim of the game in Jenga, but we certainly didn’t think that we could make it twice the fun using Swegways!

Once again, the Team Edge boys were at the top of their task to make us laugh, and with the number of crazy and funny moments and challenges they faced while recording this video, they succeeded.


This is another video full of funny jokes and moments that can make us LOL.

Of course, we hope that these videos will also encourage our lovely UK Swegway Challengers and Hoverboard lovers to also share their vision of fun with us!